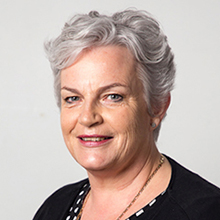 Carolyn joined Bupa as Director Clinical Service Improvement (CSI) in April 2017 and became the Chief Operating Officer and Lead Nurse New Zealand in July of the same year. Carolyn moved over to Bupa’s Australian aged care business as Chief Operating Officer from November 2018 to July 2019, returning to New Zealand to act in the role of Managing Director for Bupa Villages & Aged Care New Zealand. She was confirmed in the Managing Director position in February 2020.

Prior to joining Bupa, Carolyn worked as Executive Director, Clinical Operations for the Illawarra Shoalhaven Local Health District based in Wollongong, New South Wales. She also worked as a General Manager for Canterbury DHB, has been the Chief Operating Officer at Wairarapa and Hutt Valley DHBs, and worked as the Executive Director of People and Culture for the Wairarapa, Hutt, and Capital and Coast DHBs. She has experience in the public health system in New Zealand and Australia, as well as in the private health sector and for ACC in New Zealand.

Carolyn was appointed to the InterRAI New Zealand Governance Board in February 2018 as the Nurse Representative and is a member of the National Aged Residential Care Steering Group.