Funding to bring aged care nurses’ pay up to the level of public hospital nurses is a huge boost for the sector and is being celebrated by the Aged Care Association.

At the NZ Aged Care Association conference in late 2020, Minister Little made a commitment to deliver pay parity for aged care nurses.

“We are so pleased the Government has made good on the promise”, says Association chief executive, Simon Wallace.

“The Aged Care Association is looking forward to working with the Ministry of Health, Te Whatu Ora and Te Aka Whai Ora to make sure the plan achieves its intended purpose. We know it will be complex, as there are over 650 aged residential care facilities in New Zealand.

“While this funding boost is not a silver bullet, it will go a long way to resolving the issues in the aged residential care sector, says Wallace.

“The Government will need to put in place a plan to maintain pay parity in future.”

By Liz RobinsonAdvocacy and PolicyNo Comments

This situation was compounded in 2018 when nurses working in the country’s DHBs negotiated a pay rise that resulted in a pay gap between hospital nurses and aged care nurses.

All of a sudden, DHB’s were able to deal with their nursing shortages by attracting nurses from aged care with higher pay. This left our sector struggling to attract and retain the staff required to provide care for older New Zealanders.

In June 2020 we launched an online Fair Pay for Aged Care Nurses petition and achieved over 15,000 signatures in just one month.

And then we ran full-page ads in the weekend editions of the NZ Herald, the Dominion Post, The Press and the Otago Daily Times. 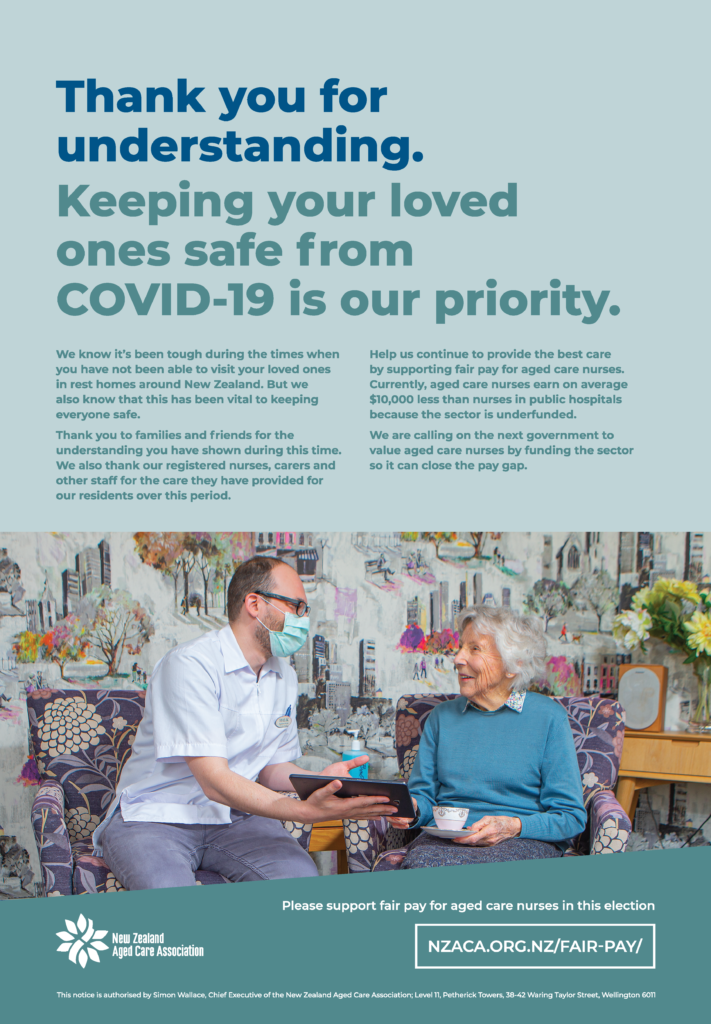 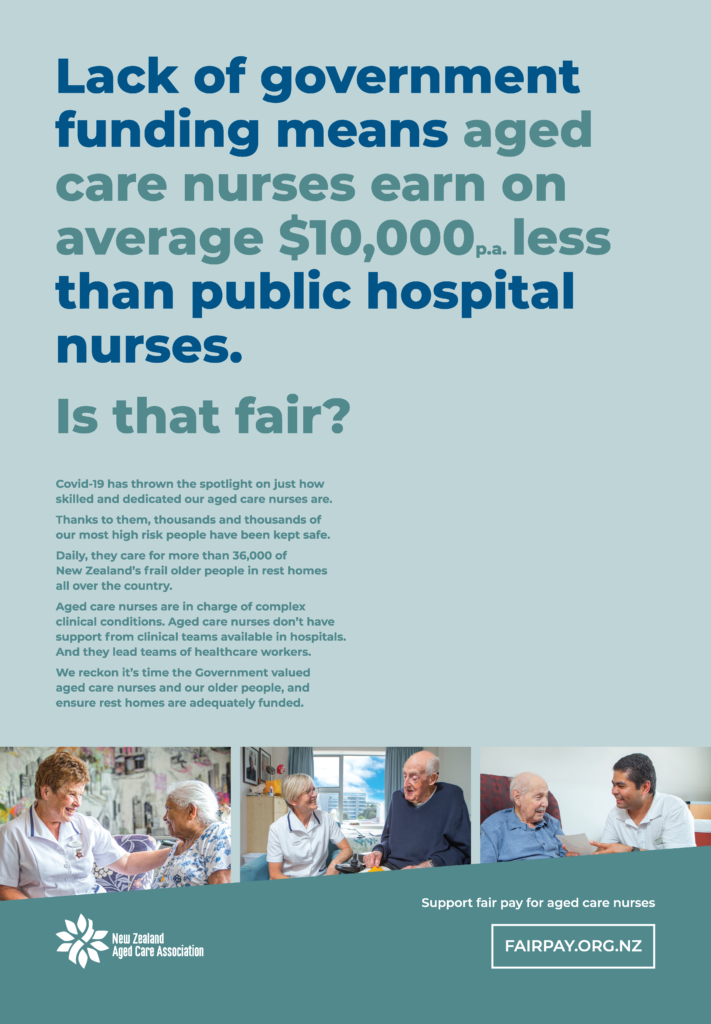 And feature stories in Stuff, NZ Herald, and RNZ Checkpoint

Plus plenty of online ads. 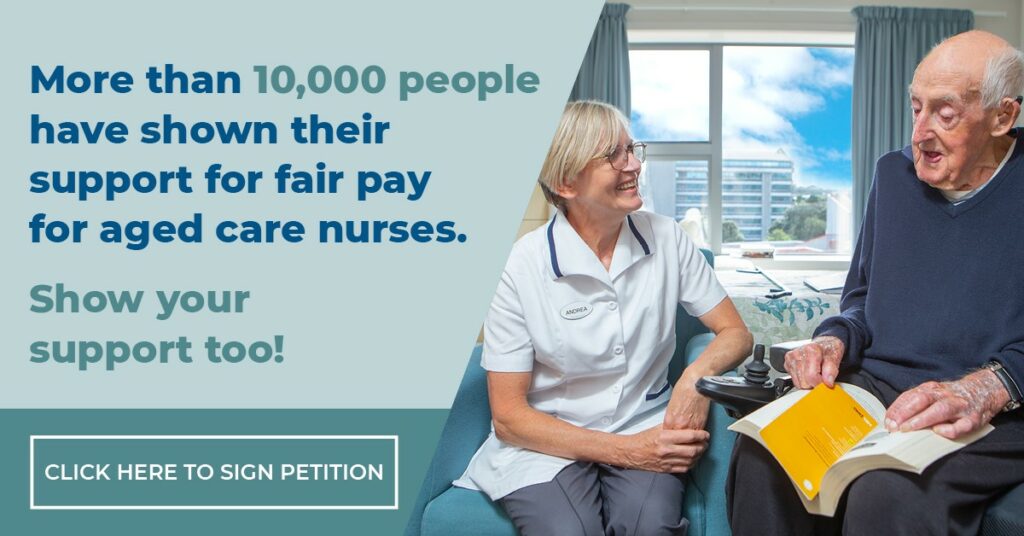 To highlight the issue across all four major political parties and celebrate achieving the 15,000 signature milestone on our petition a colourful event was organised to present the petition at Parliament just prior to the 2020 General Election. Copies of the petition were presented to:

To create colour and meaning, a group of aged care nurses wearing PPE with Support Fair Pay printed on them joined the event at Parliament. As a symbolic gesture, they removed the PPE which were presented, along with copies of the petition, to the politicians by Simon Wallace and NZACA Nursing Leadership Group Chair Dr Frances Hughes. 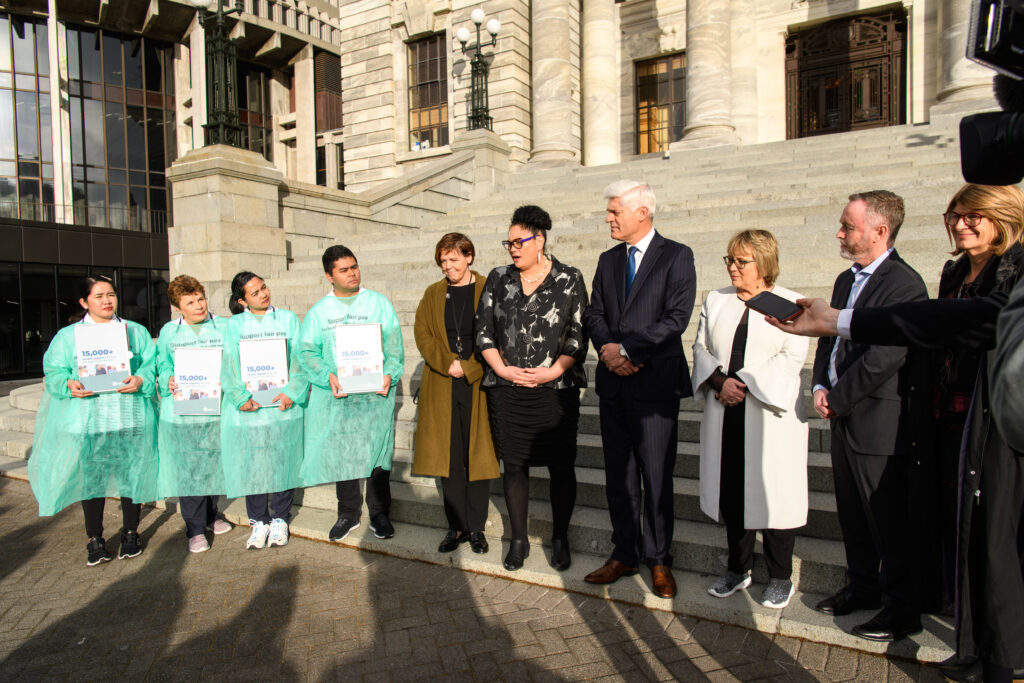 All four politicians pledged support for Fair Pay for Aged Care Nurses and to work collaboratively in the new Parliament to achieve this.

The petition was tabled at the Health Select Committee the following year.

The event was covered by Radio New Zealand on Morning Report featuring an interview with Dr Frances Hughes.

We created talking points for members to use at General Election candidate meetings and refined a manifesto to lobby political parties.

The aged care petition went to the Select Committee in May 2021.

You can read the transcript on the Parliament website (pdf)

The report of the Select Committee can be downloaded here (pdf)

By admin In Media Releases

The disconnect between the Government’s immigration policy and what is actually happening on the ground in aged care and other sectors is frustrating, the NZ Aged Care Association says.

NZACA chief executive Simon Wallace says, “The aged residential care sector is in crisis, there is no other word for it.

“Over 20 carehomes have closed permanently this year, over 1200 care beds have closed because of staff shortages and there are more than 1200 vacancies for registered nurses.

“Meanwhile, the Minister of Immigration is refusing to allow internationally qualified nurses apply for New Zealand residency straight away, unlike acoustic engineers and chief information officers.

“We want these nurses to be given residency from day one, and to be bonded to an aged care employer for two years in order to provide continuity of care for residents.

“There are nowhere near enough nurses to care for older New Zealanders – and the nurses who are trying to cover all these vacancies are burning out and leaving the profession.

“Immigration settings must ensure the sector’s access to internationally qualified nurses is not hindered.

“We urge the Government to urgently review the immigration green list now, not in May next year as planned,” Wallace says.

The NZACA has recently made a submission to the Ministry of Business, Innovation, and Employment on the Future of the Skilled Migrant Category. The submission can be viewed here (pdf).